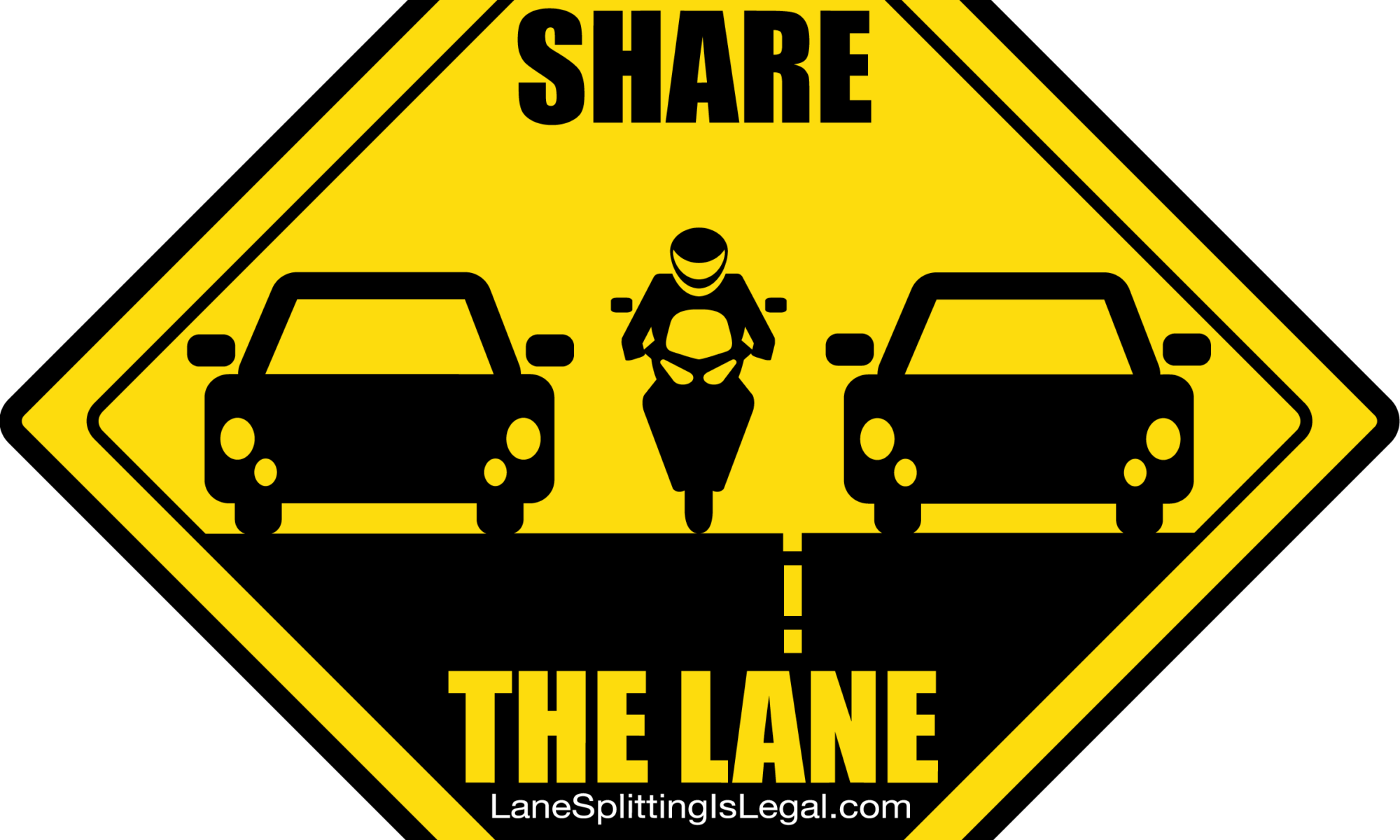 I’m a motorcycle nut—perhaps you’ve noticed. I commute on my trusty R1200R, so I ride every day, rain or shine and  I do a lot of lane splitting in heavy traffic.

Lane splitting, or lane sharing, has always been legal in California, but recently the CHP announced their official lane splitting guidelines. Because a lot of motorists don’t know that lane splitting is legal, a lot of folks thought it’d be good to get some additional PR mojo around the guidelines. So I created LaneSplittingIsLegal.com.

The idea is that the URL is simple and thus gets the message across on its own. It’s also pretty memorable so folks who want more info can easily go the site and learn more.

There are really two audiences for the site: drivers and riders. I plan to refine the navigation and info architecture to lend itself to more sensible paths for these two audiences, but the first version of the site launched last Monday night. It’s already getting linked to from various motorcycle forums, and I’m going to do a run of lane splitting stickers to hand out at moto events and shops.

The folks on BARF seem pretty jazzed about it—hopefully that’s a good sign that riders will be into sharing the URL. I (of course) created a Facebook page as well, for people who prefer to keep up with stuff on Facebook rather than through old school methods like websites and RSS.

Anyway, it’s a cool little project for me. If you’re a rider—or care about making California roads a happier, safer place for all—please share the site. It’s LaneSplittingIsLegal.com. Thanks! 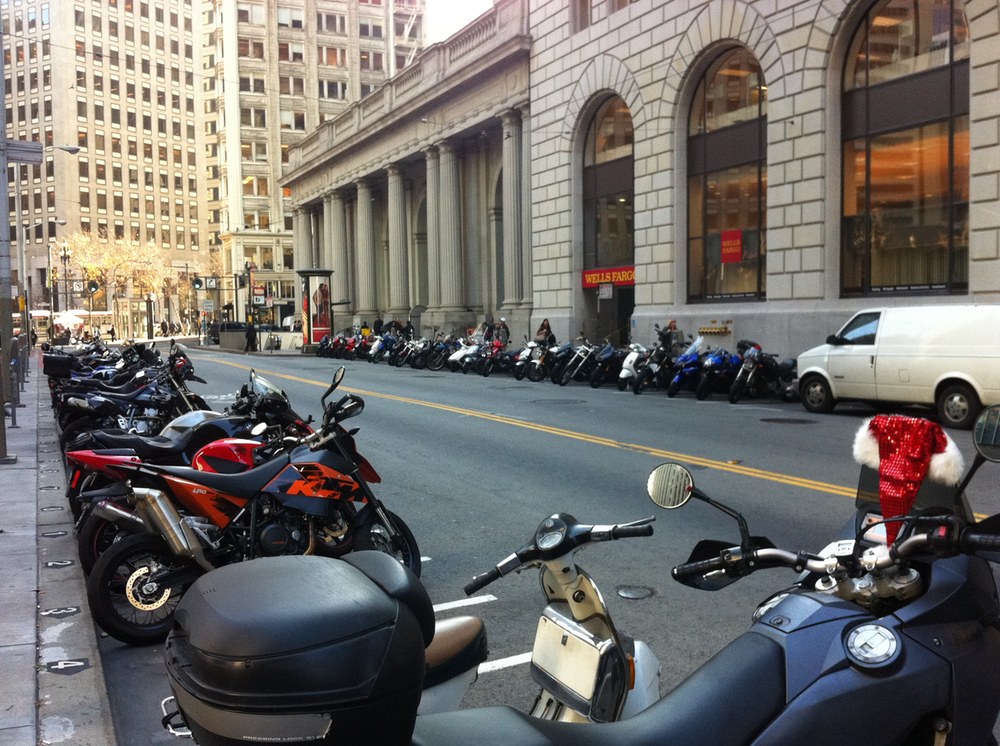 I love California for many reasons, but speaking as a motorcyclist/biker/hooligan/whatever y’all call me, California is damn hard to beat. Here’s why:

So what are you waiting for? Get on your bad motorscooter and ride! Unlike some folks, I absolutely love riding the giant, crazy supercross track of San Francisco – especially when the weather is dry and the streets aren’t treacherously slick.

All these fair-weather riders are making it a little tough to find parking. You can see my bike in there somewhere. It’s the yellow one off in the distance. ;)

There are lots of reasons lane splitting is good. For me, it’s mostly that I become almost immune to traffic congestion and can slip through gridlock smoothly and quickly. Perfect for commuting. Also, it’s fun!

Safety is another really good – but often forgotten – reason motorcyclists should split lanes, as demonstrated in this video. Today in San Francisco, a fellow Barfian was hit from behind at a stop, with his GoPro helmet cam running. The cam captured the experience from his viewpoint. Amazingly, he didn’t hit the ground, even though he was thrown from his bike by the impact.

Motorists often see the bigger shape of the stopped car, and don’t realize there’s a motorbike there too. Filtering to the front in traffic prevents this common accident. Splitting lanes is safer than hanging out behind a car.

Make sure you turn on the sounds when you watch this. Be prepared to cringe. This guy is extremely lucky he wasn’t badly injured, although I’m certain he’ll be plenty sore tomorrow.

My taste in motorbikes often runs towards the hooligan side of the street – such as my ’07 Speed Triple SE – but I also have a long-running love affair with comparatively “sensible” Boxer-engined Beemers, ever since I rode a buddy’s yellow R90S cafe racer many years ago. Lately, I’ve had my eye on a black and green Rockster around the corner at MotoJava – seems like it’d be a perfect 2-up city bike.

I wasn’t too excited when I heard there were mild updates to the R1200R for 2011, until I got a load of the R1200R Classic over on Hell For Leather. That’s right – chrome spoked wheels and black paint with white accents gets me every time. And the bike has had decent real world horsepower (110 hp and 88 ft.lb of torque) for a couple years or so now, although I have heard some significant complaints about the reliability of the 1200 engine. Very un-BMW!

I disagree, though, with Hell For Leather’s characterization of the BMW roadster rider as a slipper-wearing, pipe-smoking traditionalist, complete with monocle. Granted, this isn’t the bike for popping block-long wheelies and screaming from stoplight to stoplight with the back tire in flames, but I think it’d make a perfect San Francisco urban assault vehicle. Throw some heated grips and a top box on there, and you’re good to go. Tractable power and a reasonably slim albeit not-so-girlish figure make for an awesome lane splitter, and it should handle well enough to make weekend jaunts down the coast plenty of fun. Yes, please.

I’ve been riding motorbikes a long time, and I’ve been lane splitting since I started riding on the street. For me, it’s an integrated part of street riding. I’m not sure I’d want to ride on the streets if I couldn’t filter through traffic.

I’ve also done a lot of commuting by motorcycle, in some cases very long commutes (over 100 miles each way). My current commute is quite leisurely, at least in terms of distance. I ride from SOMA – across the Bay Bridge, some of the most hectic traffic I’ve ever been in – to Berkeley and back each day.

This evening on my way home, I encountered a new situation just off the Bay Bridge, coming into San Francisco. Filtering between a mid-size SUV and a passenger car in slow traffic, I came upon a large chunk of retread in the road. I’ve heard horror stories of motorcyclists being struck by these pieces of truck tire debris and have always had a  slight fear for them. Today I was sandwiched between a couple of cars with only a few inches to either side and I didn’t have much choice other than to attack it head on.

I quickly stood up and prepared to ride over it, as if on a dirt bike, veering slightly to the left. I narrowly miss the retread, but it hit my right foot. It felt surprisingly weighty and substantial, but didn’t hurt much. I wear pretty good riding boots – Sidi On Roads – so I’m pretty well protected, but I think if it had been a bigger chunk or it had hit my foot more squarely, my foot could have been injured.

Looking back, I suppose I could have braked hard and tucked in behind one of the cars to either side in an attempt to completely avoided the retread. This could have opened me up to a rear end collision, though. I also could have lifted my foot, which would have left me without two feet on the pegs – a bad way to be if I had ended up riding over a big part of the retread. I think I did the right thing, but I was surprised by the substantial weight of the tire, although I really shouldn’t have been.

When I’m lane splitting, I’m constantly scanning the activity of other vehicles. I obviously wasn’t paying enough attention to other hazards. Lesson learned: remember to look at the road, too.